The Most Popular Streaming Shows & Movies in the World from 2022

2022 was a huge year for television, as streaming platforms continued to diversify their commissioned shows and movies to cater to wider audiences.

The team at Protect Your Bubble has analysed data from FlixPatrol for Netflix, Amazon Prime, Disney+ and Apple TV to identify what the most popular shows & movies were last year.

MAPPED: The Most Popular Netflix Movies Worldwide in 2022 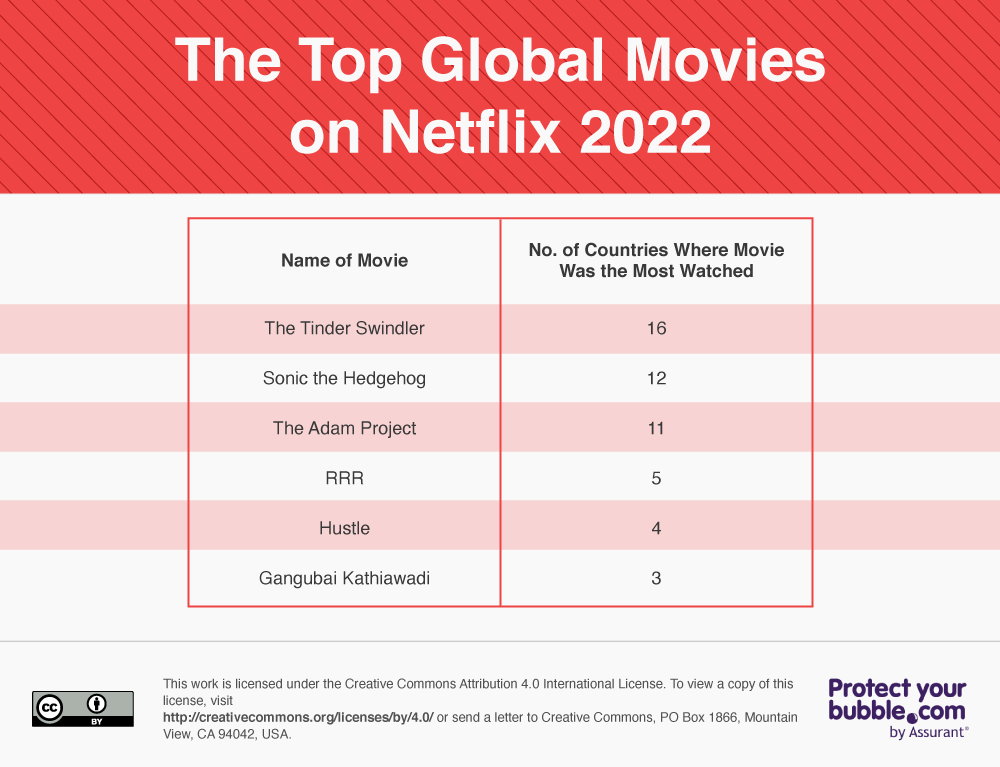 ‘The Tinder Swindler’ was a resounding winner worldwide and reached the top in 16 countries. ‘Sonic the Hedgehog’ (top in 12 countries) and ‘The Adam Project’ (top in 11 countries) take up the 2nd and 3rd spots.

The Indian biographical crime drama, ‘Gangubai Kathiawadi’ also makes the top 5 as it appears at the top in 3 countries. The true story of the uprising of a young girl who faces extreme adversity isn’t as well-known in the UK, but it’s certainly worth a watch.

See our global map below to identify which countries watched the most popular Netflix movies: How the Grinch Stole the UK Crown

The UK went against the grain. Our top movie was ‘How the Grinch Stole Christmas’ with appearances in the top 10 throughout November and December. It reached the top spot on November 25th, December 10th, 15th and 18th.

So, despite ‘Glass Onion’ becoming Netflix’s sixth biggest film debut, in the UK the Grinch stole the crown.

MAPPED: The Most Popular Netflix Shows Worldwide in 2022 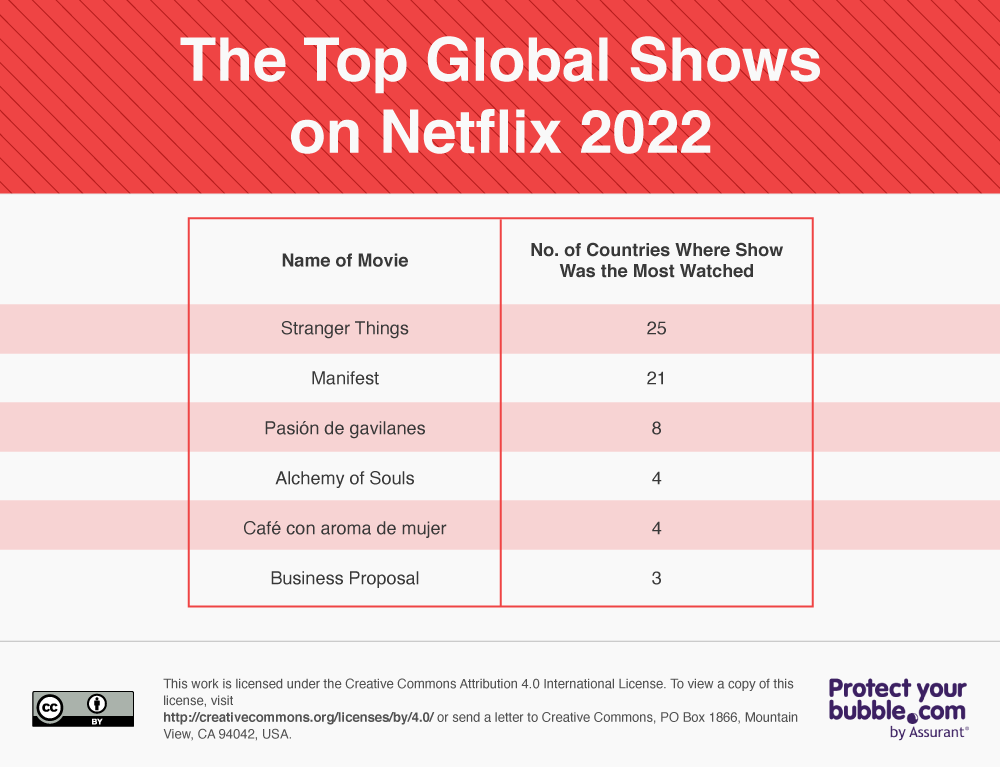 ‘Stranger Things’ took the world by storm again in 2022 and even led to a Kate Bush revival (her 1985 track ‘Running Up That Hill’ was a UK No.1 for three weeks) so, it’s unsurprising that it was the most popular Netflix show last year internationally. It topped the charts in 25 countries, with ‘Manifest’ close behind (being the most popular in 21 countries).

2022 was a great year for Colombian shows, as ‘Pasion de gavilances’ and ‘Café con aroma de mujer’ made the top 5 most popular shows internationally.

See our global map below to identify which countries watched the most popular Netflix shows: Unfortunately, ‘Café con aroma de mujer’ is not available on the UK version of Netflix. However, 2 seasons of ‘Pasion de gavilances’ are available to be streamed. The show follows the life of three good-natured brothers, as their lives get derailed by a tragedy that leads them on a revenge mission. Amazon Prime released some breakthrough movies & shows, but the real standout is ‘The Lord of the Rings: The Rings of Power’ which featured as the top show in 58 different countries Worldwide; the most of any show on any streaming platform. 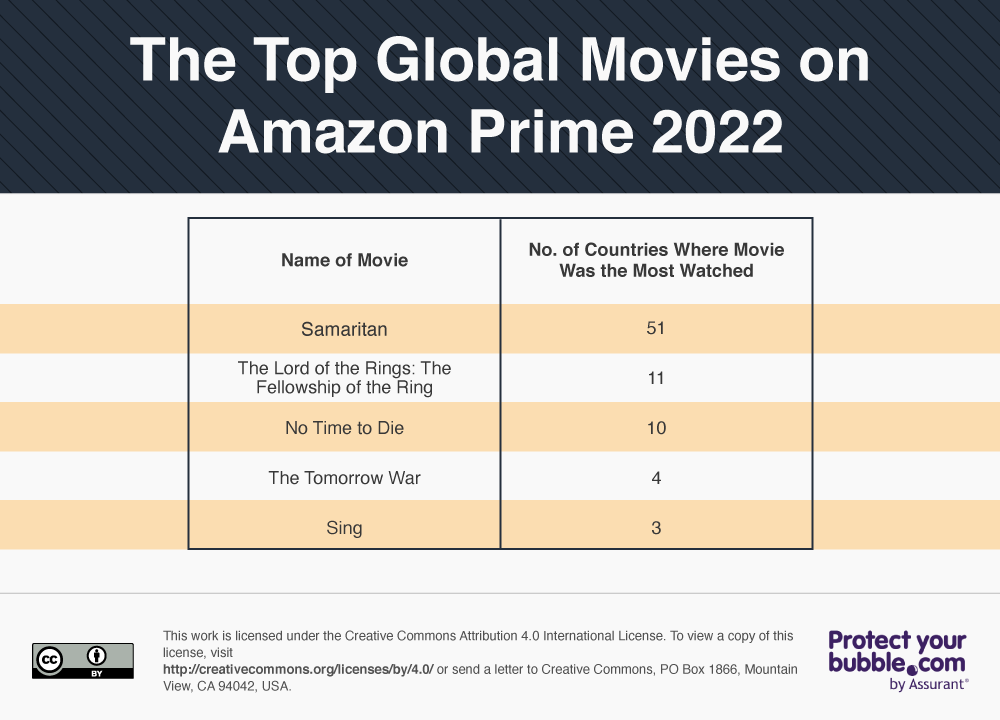 ‘Samaritan’ was Amazon Prime’s top movie – with it being the most popular in 51 countries. Disney+ was one of the only streaming platforms where older content dominated the lists worldwide. ‘Grey’s Anatomy’ debuted back in 2007, and came top in 20 different countries (although new episodes did air in 2022).

‘The Simpsons’, another long-standing show, was close behind as the most popular show in 15 countries. Also, the most popular movie on Disney+ in 2022 was officially released in 2021 - ‘Encanto’ was top in 51 countries. This beat the eagerly anticipated Lightyear; a Toy Story spin-off movie about Buzz Lightyear, which was released last year.

It looks like we are set to be spoilt in 2023 too, with new seasons of Netflix’s You and The Witcher coming soon. We can’t wait to see which unexpected gems will top the charts this year.

⭐️ Don’t forget, you can insure your precious gadgets in just 3 mins with Protect Your Bubble.* 🏆 😃👍 Awarded Highly Commended in The Finder Awards for Gadget Insurance Customer Satisfaction in 2022